No fewer than four US cities claim to be the origin of this famous ice cream dessert. Two were before 1910; soda fountains in Wilmington, Ohio and in Latrobe, Pennsylvania. In 1904, Dave Strickler, a druggist apprentice at Tassell Pharmacy in Latrobe put three scoops of ice cream between two halves of a banana and topped it with crushed nuts, marshmallow, pineapple slices, cherries, and syrups and called it a “banana split sundae.” In 1907, owner Ernest R. Hazard of The Cafe in Wilmington made a similar dessert in his town, thinking it was an original idea.

At the time bananas were a recent import. Lorenzo Dow Baker of the Boston Fruit Company brought them to Boston from Jamaica beginning in 1870. In the 1890’s the company merged with another firm to become the United Fruit Company (Chiquita). They formed large plantations in Costa Rica, Honduras, Guatemala and Colombia. Growing this product in Latin America made them cheaper than apples or oranges, because of the low wages the company paid workers. Chiquita controlled 80% of the banana market at that time.

When this exotic fruit came to the US, people weren’t sure how to open it.  Yet, the peel was named a “sanitary wrapper” as a selling point. Funny, because no one needs convincing now; we eat 26 pounds/person/year in the United States! Wish I could end the story there, but this fruit has a bitter history.

Greed for this berry and the money it generates for monopoly companies has determined the fates of Central American and northern South American countries for 100 years. In those areas the phrase “banana republic” is a reality not a cute (although insensitive) store name. Jacobo Árbenz, the 1951-1954 Guatemalan president who believed agrarian reform would increase his country’s economic prosperity is a key example. His government purchased and redistributed uncultivated United Fruit plantation lands to small farmers. As a result, he was ousted from power with help from the United States. The economics and politics of his country have never been the same. There and elsewhere, dictators were ushered in, territory grabbed, and as García Márquez chronicles in 100 Years of Solitude, people were massacred in the name of bananas.

Why? It’s big business ($8 billion in the Americas last year) and they need a lot of land to grow on. When the fruit are hit with a disease often the only way to move forward is to start a new plantation. Large growers like Dole and Del Monte have fallow land to use for a fresh beginning. They also apparently use pesticides to counter the diseases, including chemicals illegal in the United States. When these are sprayed over the fields by air with workers on the ground it can cause sterility in both men and women. (See the film, Bananas!) The more I discover about this produce staple, the sadder I become. However, I am comforted in what I’ve learned does the most good to remedy the situation. 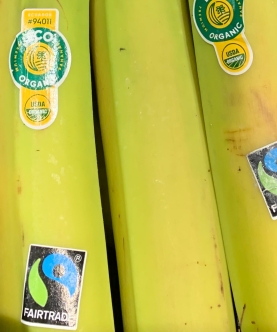 According to Dan Koeppel, author of Banana, the best way to support the farmers and their countries is to buy organic, fair trade bananas. That makes a difference for small growers by giving them their livelihood and profits which stay local. Successful local businesses mean less powerful banana monopolies and more stable Latin American democracies.

In Madison, this popular fruit is $.45/pound for conventional and $.69/pound for the organic, fair trade product. I’d gladly pay an extra $.24 to $.48 for our one to two pounds a week to support a good, healthy living for farmers in Latin America. What is your opinion of importing produce, and of fair trade?

13 thoughts on “Who Made the First Banana Split?”